The recently signed “Phase One” trade deal has led to some optimism surrounding U.S.- China relations. That said, much of the conflict between the two countries can be traced to China’s desire to be a technological power. China is unlikely to cede its ambitions, suggesting there will be an altered landscape moving forward regardless of the trade war outcome.

The “Phase One” trade deal has been viewed with skepticism by some analysts. The deal mostly left existing tariffs in place, and there are doubts whether China can actually deliver on its promised $200 billion of commodity purchases over the next two years. Still, the deal showed a willingness to compromise and is an important act of de-escalation that seems to take worst-case trade war outcomes off the table. However, even with this positive outcome and a path to the potential reduction of tariffs taking shape, the U.S.- China relationship has been altered in ways that will likely persist.

While tariffs and trade deficits dominate the headlines, a separate facet of the U.S.-China conflict has been efforts by both the U.S. and China to reduce technological dependence on the other. This effort actually kicked into gear pre-Trump administration when China issued their “Made in China 2025” strategic plan in May 2015. In short, the plan’s goal is to move China away from a focus on manufacturing cheap, low quality goods and shift attention to high tech fields. The plan lists 10 core industries of emphasis, such as pharmaceuticals, aerospace, robotics, and semiconductors, which are all currently dominated by countries such as the U.S. This was viewed with irritation by developed countries around the world, as it marked a shift from China as a trade partner to a technological rival homing in on higher-value products and services. Notably, in one of the first major tariff escalations of the trade war announced in June 2018, the $34 billion in Chinese goods concentrated on areas identified in the “Made in China 2025” plan. Here in the U.S., the results of the trade war are often seen through the eyes of displaced soybean farmers impacted by Chinese retaliatory tariffs, but the conflict is best understood as an effort to contain the rise of China as a technological power.

Huawei: A Focal Point of the Conflict

Many key disputes of this conflict have played out in the case of Chinese tech giant Huawei. The telecom company is a leader in 5G mobile technology and is seeking partnerships worldwide to roll out new 5G networks. In 2018, citing security risks, the U.S. effectively banned domestic carriers from using Chinese-made equipment to build out networks by prohibiting any who do from winning government contracts. The U.S. has also pressured allies to inhibit Huawei, an effort that is ongoing in places like the U.K. and Germany. U.S. attempts to impede Huawei continued into early 2019, when the Commerce Department added the company and 68 of its affiliates to the Entity List, an official list of companies with whom trade is restricted for national security reasons. As a result, U.S.-based companies like Google and Micron Technology have stopped doing business with Huawei.

China’s reaction has been to accelerate their technological decoupling efforts. In May 2019, the Chinese Finance Ministry announced new tax breaks for semiconductor makers and software developers. Next, in October it created a new $29 billion fund in support of its domestic semiconductor industry. Then in December, Beijing ordered all government offices and public

buildings to remove foreign computer equipment and software within three years. The lack of leverage for the U.S. in this area is partially self-inflicted, with U.S. companies willingly trading technology transfers for access to the Chinese market, but it also stems from outright theft by China in the form of corporate espionage and hacking. Whatever the reasons, the pushback appears to be too little, too late, as Huawei successfully released  a smartphone with zero U.S. components in December 2019.

A Race for Emerging Technologies

It is difficult for China to do much more than play catch-up in established technology like semiconductors, where improvements are incremental. Still, emerging technologies such as AI, robotics, quantum computing, and next-gen IT infrastructure present greater opportunities for industry leadership. It is notable that Huawei is a leader in 5G infrastructure in the first place, putting them in competition with established network equipment makers such as Nokia and Ericsson. This did not happen by accident, as it has been reported that Huawei’s rise was fueled by as much as $75 billion in state help from tax breaks and financing. Private investment has helped the U.S. maintain its lead in research and development, but China is undoubtedly gaining ground. This could push government spending on both sides, particularly due to the potential military applications of fields like AI and robotics. 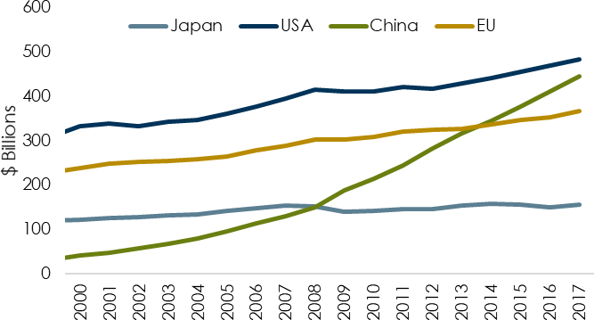 Any progress on trade negotiations should be applauded by investors. Tariffs were a primary factor in slowing global growth from its 2018 peak of 4.1% to 2.9% by the end of 2019. However, it should be understood that the landscape between the two countries has evolved in ways that are unlikely to be reversed, regardless of future negotiations with the current or new administrations. While these issues could easily arouse a re- escalation of the trade war, such a shifting environment will also create new investment opportunities. We believe it’s important to remain actively invested in both geographies using managers who can fundamentally analyze the changing opportunity set.

Under-Saved and Overconfident: A Glance at the Economy