Under-Saved and Overconfident: A Glance at the Economy

Over the past 40 years, creating and maintaining financial security has become more of a personal endeavor. Yet, despite record aggregate levels of US wealth, large portions of the population appear quite vulnerable. Avoiding late-cycle overconfidence as it relates to both spending and investment decisions is key.

When Congress passed Section 401(k) of the Revenue Act of 1978 they began a revolutionary risk-transfer as it relates to retirement savings. With employers increasingly embracing the cash flow predictability of defined contribution plans, the percentage of private-sector employees covered by a defined benefit plan has declined from nearly 40% in the late 1970’s to less than 15%  today. Being only one generation into the evolved reality of “saving for yourself,” the consumer-driven nature of the US economy could be increasingly challenged as longevity collides with an under-saved population. Working to improve financial literacy may spur better financial well-being, but this is a secular issue that only gets more critical as government safety nets are increasingly weighed down by debt and deficits.

Aggregate Statistics Overstate Reality for Many

Most headline analyses of financial conditions are overly reliant on data aggregated across entire populations. That said, growing income and wealth inequality have skewed the broad measures in a way that understates the risks to lower-income consumers. The US personal savings rate represents the fraction of personal income that is not consumed by taxes or expenditures, and was recently reported at 8.1%. While the chart below suggests a degree of stability in this level, and a dramatic improvement from the pre-crisis lows, there is still a sizable minority for which spending exceeds income. According to data from the 2017 Consumer Expenditures Survey conducted by the Bureau of Labor Statistics, nearly 63 million out of 130 million households reported negative savings overall. While some lower-income consumer units are able to reserve for their future, the averages suggest modest savings begin only as annual income rises into the $50,000 to
$70,000 range. On the other hand, the top-10% of the population, those with annual incomes greater than $150,000, reported savings rates averaging over 20%. Said another way, over 80% of these high earners participate in active savings programs, while this figure drops to around 40% for the bottom-half of earners. 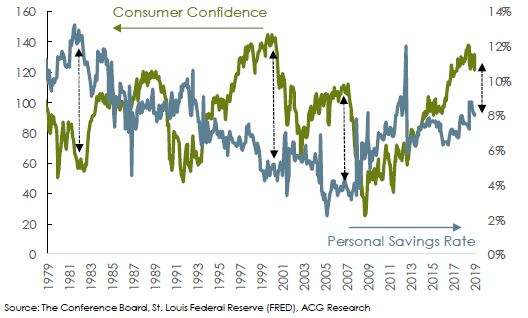 Unrealistic Return Goals May Cause Discontent

It almost goes without saying, consistently saving out of current income is an important determinant of household net worth. Assuming an individual can overcome the initial hurdle of saving, it’s also important to maintain patience and realistic expectations for portfolio growth through time. With the extraordinary monetary policy of the past decade potentially pulling-forward future returns, ACG has frequently cited “muted return expectations” as a theme. With this being the case, the results of an independent online survey conducted by Research Plus Limited recently caught our attention. The survey included over 25,000 investors in more than 30 countries throughout the world, and focuses on a variety of behavioral aspects tied to investing. The chart below is particularly telling as it details annual return expectations over the next five years, which continue to rise despite the extended nature of the current bull market. With 47% of survey participants expecting at least double-digit outcomes, the average investor in the survey is expecting annualized total returns of 10.7%. For context, a balanced portfolio of stocks and bonds has only delivered about 8.8% per year since 1950, and even this level of return could be challenging given current valuations and slower growth. Also noteworthy are observations that the overall holding period for an investment has declined to just 2.6 years, and in times of uncertainly (specifically 4Q-18) nearly 60% of respondents moved some of their portfolio into lower risk investments or even cash. As relatively new investors who have largely experienced only positive return environments, Millennials tend to have the highest overall expectations and the least amount of patience.

Since the Global Financial Crisis, there has been a recovery in the aggregate savings rate and a more responsible approach toward household debt. However, it’s clear that not all segments of the population are thriving. The extended economic expansion has only recently led to accelerated wage growth and thereby savings potential for the nation’s lowest earners. Everyone wants to feel in control of their personal finances. While consistently difficult, managing the savings versus spending decision, and being aware of behavioral biases such as overconfidence can go a long way toward achieving long-term goals and reducing potential financial fragility.